Methods in Research on Research (MiRoR) project aims to encourage critical thinking and to promote effective research communication. As a strategy to pursue these goals, the MiRoR project launched a Journal Club. The activity is scheduled every three months and the session is led by two different MiRoR Early Stage Researchers (ESRs). During each session, the participants discuss a recently published journal article with the aim to translate the debate into a Letter to the Editor. Therefore, this initiative is an ideal channel to engage researchers at an early stage and invite them to publish in a high impact journal. The diversity of ESRs, supervisors and mentors in the MiRoR group, provides the opportunity to select and review scientific articles from different fields of knowledge including medicine, public health, epidemiology, biostatistics, computer science and pharmacy, among others.

The two ESRs for the first MiRoR journal club were Linda Nyanchoka (Université Paris Descartes) and Camila Olarte Parra (Ghent University). They were supervised and guided by Professor Els Goetghebeur, from the Department of Applied Mathematics, Computer Science and Statistics at Ghent University.

To organize and execute the first Journal Club, the following steps were undertaken:

Reflections on the Letter to the Editor from Linda and Camilla

This first MiRoR journal club session took place in November 2016. One of the major barriers encountered was time. As letters to the editor are typically admissible within four weeks of publication, selecting an article meeting our criteria was no easy feat. Additionally, critically thinking while reading new articles on varying subjects required cognitive flexibility.

We found that, material to the journal club’s mission, is the ESRs’ extracurricular effort and time commitment to carefully understand the nuances of the article and articulate a position with carefully crafted arguments. Through these endeavors, we hope to impact science by starting or changing discourse on the subject with other scientists. These achievements will be manifested by a publication at best, or at a minimum, through public dissemination online. Thus, we found the exercise to be a wonderful way to contribute to the science community by opening channels of constructive communication.

All in all this process was a positive way to communicate not only with other journal authors and their editors, but also indirectly with the clinicians and patients for whom our discussion is relevant. 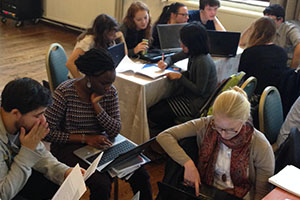